Notice: Function add_theme_support( 'html5' ) was called incorrectly. You need to pass an array of types. Please see Debugging in WordPress for more information. (This message was added in version 3.6.1.) in /home/algorithmconference.com/public_html/wp-includes/functions.php on line 5831
 Algorithm 2022 speaker: Michael Kanaan – Algorithm Conference 
Deprecated: Function _register_controls is deprecated since version 3.1.0! Use Elementor\Controls_Stack::register_controls() instead. in /home/algorithmconference.com/public_html/wp-includes/functions.php on line 5379

Director of Operations, US Air Force

In recognition of his fast-rising career and broad influence, he was named to the Forbes “30 Under 30” List and has received numerous other awards and prestigious honors — including the US Government’s Arthur S. Flemming Award.

Captain Kanaan is the author of a new book – T-Minus AI: Humanity’s Countdown to Artificial Intelligence and the New Pursuit of Global Power. 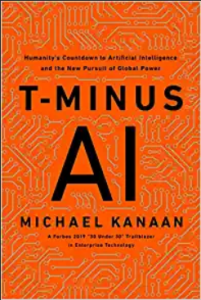 Director of Operations, US Air Force

Professor of Law and Health Sciences, Univ. of Surrey

Registration for workshop and for the conference itself is now open. The workshop has a limited number of tickets, so hurry and register if you want to guarantee yourself a spot. To reserve your ticket(s), click on that big red button.

Want to register using your favorite cryptocurrency?  We’re on your side. Just click that button to email us to begin the process. We’ll get back with you pronto.

Become a sponsor or exhibitor

Want to sponsor Algorithm 2022 or have an exhibit space during the conference? Click that button to view the sponsorship prospectus.

Subscribe to our newsletter to get the latest update about Algorithm 2022 in your inbox? Promise, no spam!